DISCLAIMER:
No written consent was obtained from patients as there is no identifiable patient data included in this case report.

We present the case of a 62-year-old man who presented with no symptoms of venous insufficiency, with left leg swelling and pain a few days after being treated for floating deep vein thrombosis (DVT), whose condition was later diagnosed as May-Thurner syndrome (MTS). This report emphasizes the importance of a broad differential diagnosis that includes MTS and considers anatomic abnormalities in situations of persistent and unprovoked DVT of the lower extremities.

Presentation of the case

A 62-year-old man with a medical history of rheumatoid arthritis and gastroesophageal reflux disease presented to hospital with persistent pain and swelling in his left leg for one day. He did not report associated chest pain, shortness of breath, myalgia, fever, or chills, or numbness in the legs, tingling, or altered sensation.

He has had no recent medical contact, trauma or travel. He had no family history of bleeding disorders. A few days before presentation, the patient reported having similar symptoms and was found to have floating deep vein thrombosis (DVT) in the left common femoral and great saphenous veins for which he was placed on outpatient anticoagulation.

His medications at the time included methotrexate, folic acid, pantoprazole and apixaban. He had a history of left leg DVT 6 years ago from total knee replacement surgery and had been taking rivaroxaban for a few weeks after the event.

Physical examination. At presentation, the patient had a temperature of 36.6°C, heart rate of 76 beats/min, respiratory rate of 18 breaths/min, blood pressure of 128/78 mm Hg, saturation rate of 96% oxygen to the room. air and a body mass index of 28 kg/m2.

On physical examination, the patient did not appear to be in acute distress. Her abdomen was soft, not distended, and painless. He had significant tenderness in his left leg from the ankle to the thigh. His left calf measured 20 inches and his right calf measured 18 inches. Pulses were palpable in the bilateral lower limbs. 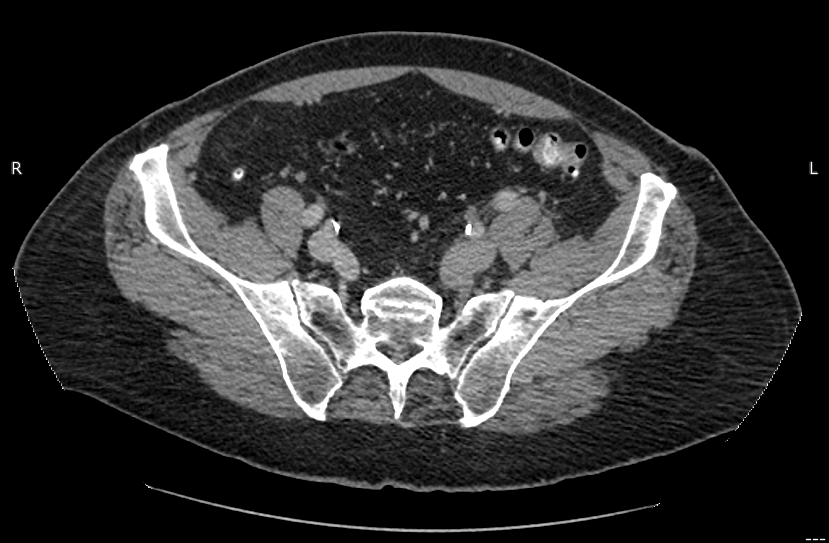 Discussion. MTS is a venous syndrome described as compression of the left ilio-femoral vein by the overlying right common iliac artery and the underlying lumbar vertebrae.1 Continuous irritation of the venous endothelium by compression and pulsation of the iliac artery causes the development of intraluminal venous spurs and promotes the formation of clots.2 MTS is thought to account for 2% to 5% of all DVTs; however, post-mortem autopsy studies suggest that the prevalence of MTS may be much higher.3 MTS tends to occur more frequently in young women and patients are often asymptomatic. However, when symptoms are present, patients are likely to have acute or recurrent left lower extremity proximal DVT or a clinical presentation of chronic venous insufficiency.1

MTS is an anatomical abnormality that results in ilio-femoral vein outflow obstruction by external compression.4.5 This syndrome is highly variable in location and level of obstruction, with the most common form being compression of the left iliac vein by the overlying right common iliac artery and fifth lumbar vertebra.2 Although many patients remain asymptomatic, there are identifiable risk factors for MTS, including female gender, use of oral contraceptives, scoliosis, radiation exposure, and hypercoagulable disorders.3.6-8 The most common symptoms are swelling and claudication of the lower limbs. Symptoms of chronic venous insufficiency, such as lower extremity edema, skin discoloration or ulceration, and female pelvic congestion syndrome, may also be seen.2,6,7

When MTS is suspected, a color Doppler ultrasound is usually performed initially because it is noninvasive and less expensive than other diagnostic tools.9.10 However, Doppler has relatively low sensitivity for visualizing venous compression and cannot determine the location of the obstruction or the number of spurs in the lumen.1.9 The modalities of choice in suspected cases are CT venography, magnetic resonance venography, intravenous ultrasound and conventional venography.9.10 However, despite multiple imaging options, the gold standard for diagnosing STDs is conventional venography with intravascular ultrasound.9.10 This form of imaging provides information about the luminal diameter and can reveal the level of obstruction in the blood vessel in addition to having certain therapeutic benefits.

Differential diagnoses to consider include the most common causes of iliac vein compression: malignancy, lymphadenopathy, hematoma, and cellulitis. Additionally, various etiologies of uterine enlargement, aortoiliac aneurysms, retroperitoneal fibrosis, and osteophytes should remain potential diagnoses until TMS is confirmed.2Workup for coagulation disorders and screening for malignancy should be performed prior to diagnosis of STDs to exclude other etiologies.2 MTS is more likely if the patient is young, female, uses an oral contraceptive and has lower extremity involvement.1 However, in this case, the patient was an older man who had extensive MTS for several years but did not develop a thrombus or any symptoms until age 62, indicating that MTS should not be overlooked as a diagnosis for any patient population.

Treatment for MTS is not necessary unless it is symptomatic. In the past, open surgical procedures were performed; With the latest advances in technology, less invasive interventional radiology-guided repairs are becoming more popular. Removal of clots by mechanical thrombectomy, pharmacological thrombolysis and stenting of the anatomical defect is the mainstay of treatment.6.9 For patients in whom thrombolysis is contraindicated, a multitude of various endovascular thrombectomies, such as rheolytic, rotational, or aspiration, can be used instead.6,9,10 Although the use of a prophylactic inferior vena cava filter is generally not recommended, IPatients’ initial anticoagulation cannot be delayed, as it is associated with a higher risk of pulmonary embolism.3.11 Low molecular weight heparin or fondaparinux are preferred over unfractionated heparin because of the reduced risk of bleeding and heparin-induced thrombocytopenia.2 Rivaroxaban has also been shown to be safe in patients with iliofemoral vein thrombosis.12There are no standardized guidelines for anticoagulant therapy for patients with STDs, and sources vary regarding the duration of antiplatelet therapy. Some studies suggest antiplatelet therapy for 6 weeks to 3 months combined with aspirin for an indefinite period, while others advise antiplatelet therapy for at least 6 months to prevent restenosis and aspirin indefinitely.1.13 The expert opinion of a hematologist can be helpful in developing an anticoagulation plan that takes into account the specific risks and benefits for each patient.

After surgery, Doppler imaging can be performed to confirm patency of the iliac vein. Thereafter, patients should be screened at 6 months after diagnosis, then annually with duplex ultrasound. If patients develop symptoms or there is a defect detected on duplex ultrasound, cross-sectional imaging is required.13

Result for patients. On the day of presentation, the patient underwent interventional radioguided venography; however, the chronically occluded vessel could not be crossed for stenting at this time. Clot thrombolysis was achieved with alteplase infusion followed by heparin for 3 days. Repeat interventional radioguided venography was performed to stent the persistent stenosis of the left common iliac vein. The patient was not put on aspirin because he was allergic but on clopidogrel for at least 6 weeks. The patient tolerated the procedure well and was discharged home on anticoagulant therapy with apixaban, 5 mg twice daily. The patient remained asymptomatic during outpatient follow-up.

Conclusion. Our case underscores the importance of considering anatomical abnormalities in situations of persistent, unprovoked DVT of the lower extremities and urges healthcare providers to expand their differential diagnoses and diagnoses to include anatomical abnormalities that may be at the root of the problem. origin of the patient’s symptoms.