“To young radiologists, I would say: make sure you are part of the clinical team, that you are seen and that you are a clinician first – and a radiologist to support this clinical activity,” he said. stated in a recent podcast.

Brady also expanded on his previous comments about how technological improvements have led to the “disappearing radiologist” phenomenon. Spiral CT and other imaging advances have increased the workload of reports, and the digitization of reports has created the expectation of near-instantaneous report availability, reducing the time radiologists pass with the referents and the patients, he noted.

Part of the problem is the insufficient number of radiologists, particularly in Ireland and the UK, which lag behind Germany, France and most other European countries, according to data from the Organization for Economic Co-operation and Development (OECD).

However, even though more students could be recruited into radiology during their medical studies, the gap between training and deployment is so long that new generations of scanners and innovative techniques will emerge in the meantime, continuing to inflate the workload. The number of radiologists seems consistently far behind in an attempt to keep up with the growing demand, he told RadCast presenters and co-founders, radiologists Dr Uzoma Nnajiuba and Dr Jamie Howie.

The many faces of AI

The workload can partly be offset by artificial intelligence (AI) tools that perform repetitive and time-consuming tasks, such as finding CT lung nodules, microcalcifications in breast imaging, or polyps in CT colonography. AI will likely influence the work of radiologists in other ways as well, but it won’t make radiologists redundant, according to Brady.

“A practice that took 120 years to develop as a specialty will not be reduced to 1s and 0s or algorithms. A few years ago, medical students wondered if they should bother to consider entering radiology as a specialty. ask me that,” he said.

In fact, the number of radiology courses in the UK is growing every year, suggesting that AI is seen as a tool rather than a replacement for the radiologist, the presenters noted. But its role in radiology continues to grow and that will be reflected in a broader AI program at ECR this year and next, with hands-on workshops so attendees can see the capability of applications.

“I can imagine a scenario where, for example, after the AI ​​detects a probable hepatocellular carcinoma on MRI, it automatically diverts the study for interpretation to trainees that the system recognizes as needing training in this domain,” he said. “Previously, a lot of time would have been spent with the trainer and the trainee interpreting images together. With AI, 80% of this time could be replaced by training on the digital tool, 20% being reserved for a more valuable presence.”

AI could also enable the development of a hybrid specialty, where pathologists and radiologists would work together. In the past six years, such a merger between radiology and pathology (as a united diagnostic department) has taken place at the University of Geneva, Switzerland. AI could also be leveraged to potentially integrate genomics and radiomics into the work of these merged diagnostic departments.

In the podcast, Brady also discussed why radiology research needs to shift from low-end research on technical and diagnostic efficacy to evaluating the contribution of imaging to patient outcomes and society at large. .

Articles published recently by the Lancet Oncology Commission attempted to address the value and contribution of radiology at a societal level, he said. These articles have studied the availability of imaging and its impact on cervical cancer in countries around the world, and more broadly they have examined the effects of the availability of imaging in general on life expectancy and disease progression in 200 countries around the world.

“It’s hard to do, but that’s the kind of research we need to do more of,” he said.

“With the development of spiral computed tomography and then multi-slice spiral CT pulmonary angiography became normal and easier to do. But the number of patients being screened for possible pulmonary emboli soared, as did the number of embolisms that we identify. But what is the impact of that? I would like to find a way to compare the true death rate from pulmonary embolism in 1990 to that of today, to see what the real value of to be able to diagnose these embolisms,” Brady said.

Brady agreed, adding that these were the kind of complex issues that needed to be considered.

“We have invested huge resources in CT pulmonary angiography, which has led to more diagnoses. But these diagnoses lead to the use of even more resources. This is something that needs to be analysed” , did he declare.

From volume to value

“Radiologists are aware that we cannot continue to do more and more MRIs and scans; we need to ensure that a limited set of resources are put to best use so that, as far as possible , everything we do is meaningful,” Brady noted.

The Value-Based Radiology (VBR) movement, which began about 15 years ago in the United States, is not about suddenly changing what radiologists do, but about making sure it is recognized, as well as in times of increasing demand and limited resources. — to provide more value without spending more money, he continued. VBR is also designed to change the view of radiology as a “cost” that should potentially be minimized. It helps funders see how radiology contributes to the personal value delivered to individual patients and the value to society as a whole.

“Essentially, it’s about advocating for our specialty, educating users (patients and referrers), and educating and lobbying funders of our specialty to help us make the best use of a finite resource,” did he declare. “We’ve been chasing volume for years. We need to put a stop to that and make sure what we’re doing with our resources is appropriate and useful.” 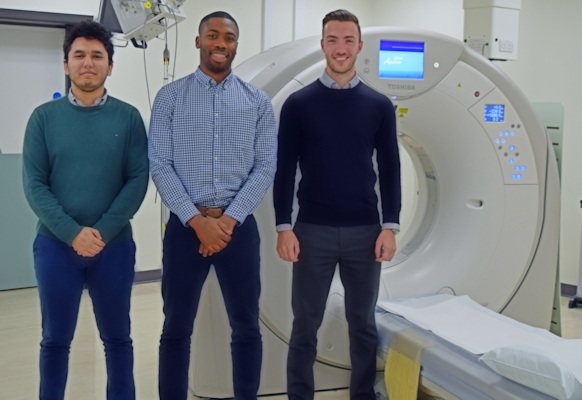 Radcast team. From left to right: Drs. Muhammad Khan, Uzoma Nnajiuba and Jamie Howie. RadCast is a series of podcasts developed by clinical radiology trainees with the goal of providing a grassroots perspective.

You can listen to the full podcast and more on the RadCast landing page or by searching RadCast on Spotify, Google or Apple Podcasts.