Axial carpal dislocations and fracture-dislocations are rare injuries to the wrist, and they are usually caused by high-energy trauma [1-3]. These injuries involve derangement of the distal carpal row and metacarpal arch and result in flattening of the proximal and distal transverse arches of the wrist. Surgical treatments using closed or open reduction and internal fixation have been described [1,4,5]. However, to our knowledge, no surgical approach using arthroscopy has been reported to date.

In this case report, we present a minimally invasive arthroscopy-assisted surgical technique, describe the presumed mechanism of injury, and report the clinical outcome of a patient with axial dislocation of the carpal peritrapezius.

A 54-year-old right-handed man complains of pain in his right wrist. He had hooked his thumb on the armrest of the door and had left the door open to back up and his thumb had been pulled by the door which had hit a pillar. The patient was a businessman with no history of right wrist trauma. Initial examination revealed significant swelling of the right hand and wrist and tenderness of the scaphotrapeziotrapezoid (STT) joint without neurovascular impairment. Plain radiographs of the right wrist revealed trapezius subluxation relative to the healthy side (Figures 1A, 1B).

(A) Anteroposterior and (B) lateral views of the right wrist (arrowheads show trapezius dislocation and arrow shows volar trapezius fragment). 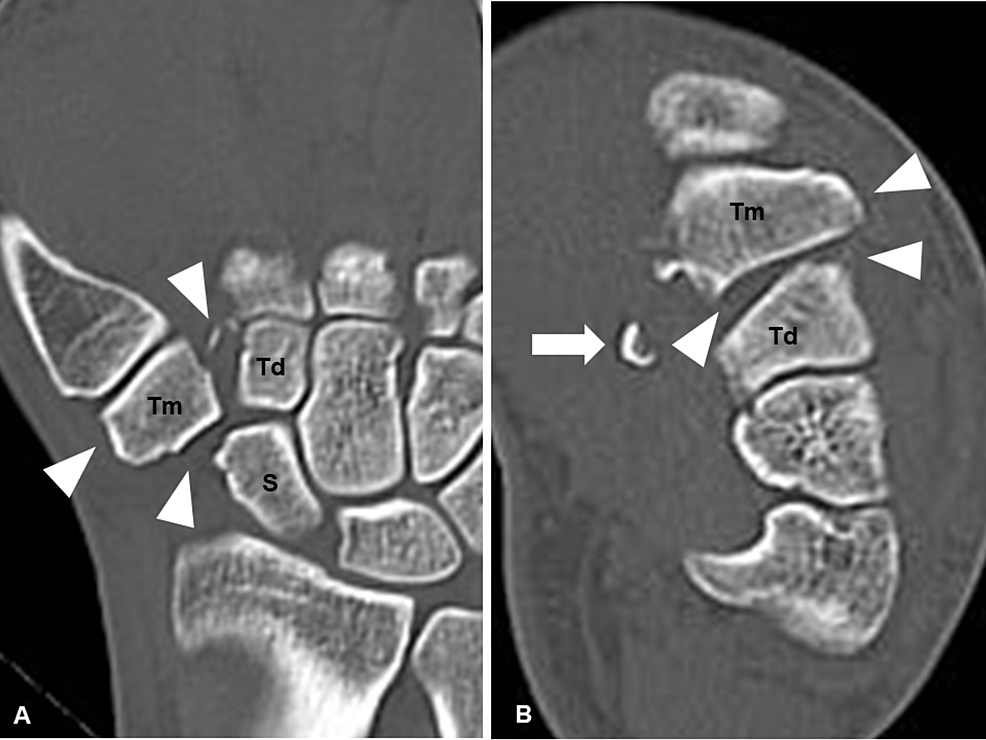 We diagnosed a case of axial carpal peritrapezial dislocation and decided on minimally invasive arthroscopic treatment.

Surgical treatment was performed under regional anesthesia four days after the injury. Examination under anesthesia revealed that the thumb was unstable around the STT joint. The dislocation could not be reduced by closed, manual manipulation including traction distally and pushing from the dorsoradial direction. A 1.9 mm arthroscope (Stryker KK, Tokyo, Japan) was used under wet conditions. Using a pull tower (Arc Wrist Tower, Acumed LLC, Hillsboro, OR) with a 10-pound thumb and middle finger trap, 3-4 and 6R portals were created and the radiocarpal joint was observed. The scapholunate interosseous ligament (SLIL) was attenuated with hemorrhage (Figure 3A). The triangular fibrocartilage complex and the cartilage were not injured. Midcarpal radial (MCR) and midcarpal ulnar (MCU) portals were created and the midcarpal joint was observed. The SLIL injury was classified as a grade 3 injury according to the Geissler classification (Figure 3B), while the lunotriquetral interosseous ligament was not damaged [6]. A scaphotrapezial portal was created and the STT joint was observed. It revealed trapezoid and scaphoid cartilage fibrillation. A hematoma was observed on the radial side of the trapezius. After resection of the hematoma and removal of the ruptured dorsal trapezoidal ligament at the level of the fracture site, supposed to interfere with manual reduction using a shaver, a palmar fragment of the trapezius was noted (Figure 3C). The trapezius was subluxed dorsally. The pull was loosened until it was aligned at the joint between the trapezius and trapezius. The trapezius was reduced using a finger trap and bone clamp while reducing the space and dorsal contour between the trapezius and trapezius (Figure 3D). 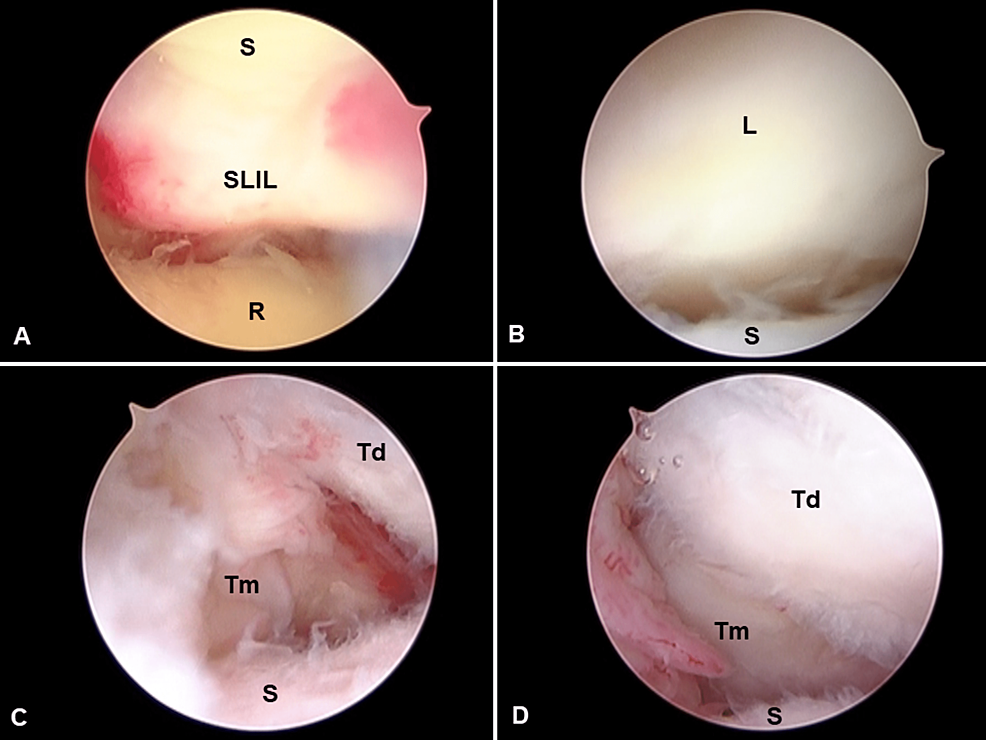 The trapezium and the first metacarpal were fixed using Kirchner wires (Figures 4A, 4B), and the wrist was immobilized using a short arm splint. 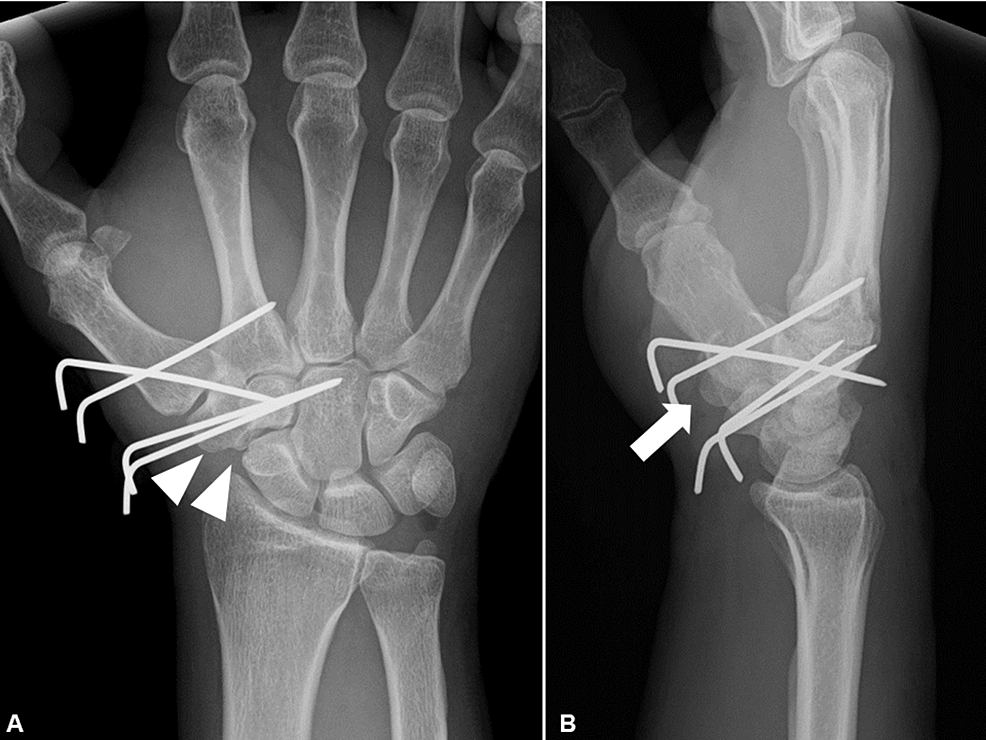 (A) Anteroposterior and (B) lateral views of the right wrist (arrowheads show trapezius reduction and arrow shows reduction of volar trapezius fragment).

One year after the procedure, bone consolidation between the trapezius and the palmar fragment was observed. Carpal alignment was maintained without traumatic osteoarthritis and dorsal intercalated segment instability deformity (Figures 5, 6). 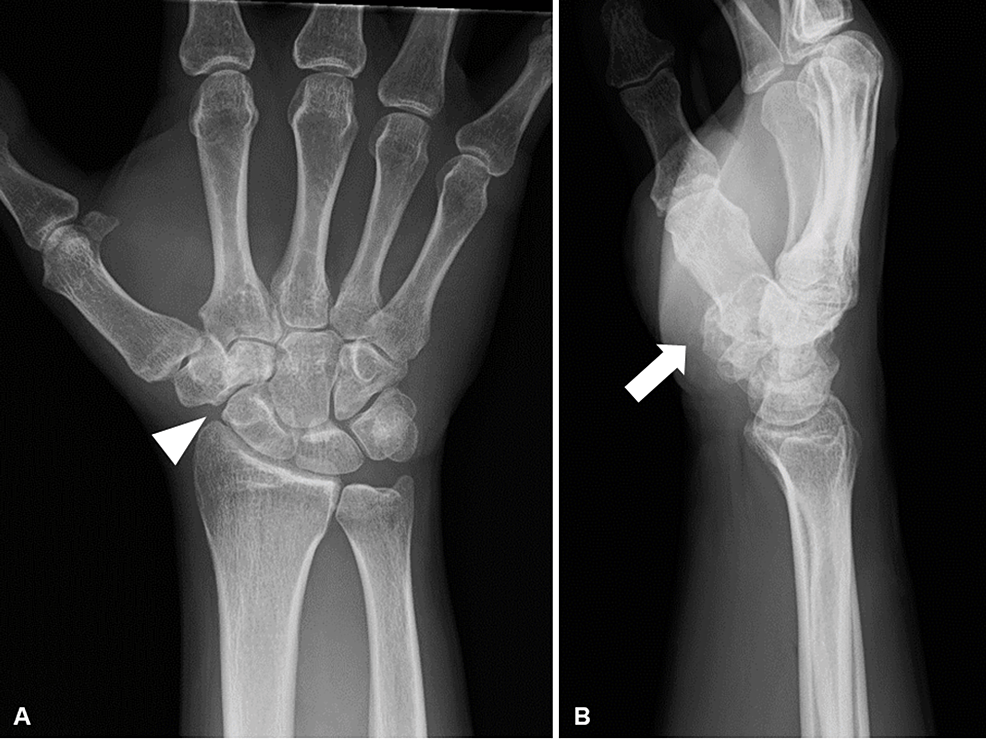 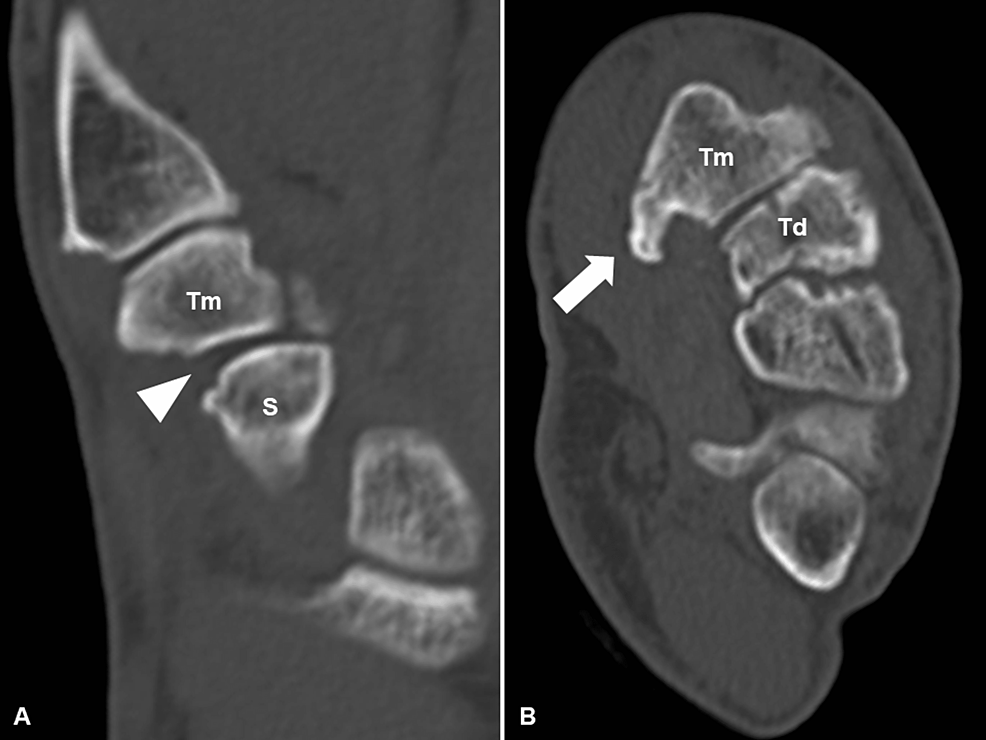 Figure
6: Computed tomography without preparation at one year postoperative.

(A) Coronal and (B) axial CT images (the arrowhead shows the articular space of the scaphotrapeziotrapezoidal joint and the arrow shows the bony union of the palmar fragment of the trapezium).

The patient’s wrist was asymptomatic during daily activities and work, and the scaphoid displacement test was negative. Right and left hand grip strength was 44.3 and 44.2 kg, respectively, and wrench pinch was 9.8 and 11.4 kg, respectively. The range of motion of the right and left upper limbs were as follows: radial thumb abduction, 50° and 50°; palmar thumb abduction, 45° and 45°; wrist flexion, 75° and 75°; wrist extension, 75° and 75°, respectively. The arm, shoulder and hand disability score was 0.8.

Written informed consent was obtained from the patient for publication of this case report and accompanying images.

Traumatic axial carpal dislocations and dislocation fractures are both serious injuries resulting from crush or blast injuries. [3]. Most previously reported cases of axial carpal peritrapezial dislocation and trapezius dislocation have been in patients with high-energy trauma. The direction of force in most cases was considered to be anteroposterior due to flattening of the carpal arch and longitudinal rupture of the metacarpals attached to the carpus. More than 90% of these traumas are open wounds, and they are often accompanied by extensive soft lesions [2]. Because closed injuries, as reported here, show subtle radiographic changes despite considerable swelling, CT images help define the exact pathology of the trauma.

In the present case, arthroscopy-assisted surgery offered a minimally invasive approach for precise anatomical reduction. Arthroscopic surgery using five portals did not cause postoperative complications, including surgical wound problems. In addition, the carpal arch could be repaired under precise reduction between the trapezius and the trapezius. No traumatic osteoarthritis was noted, although the postoperative follow-up period of one year was short. The carpal arch is a curved alignment that makes it difficult to assess reduction status using intraoperative fluoroscopy. Surgical approaches involving closed or open reduction and internal fixation have all been reported to manage similar trauma. In contrast, some reports have shown trapezius subluxation and carpometacarpal joint destruction on plain x-ray [4,5,7-20]. We believe that arthroscopic reduction allowed us to eliminate reduction inhibitors and achieve complicated alignment on both closed reduction and internal fixation and open reduction and internal fixation. The clinical outcome was satisfactory, although grip and pinch strength did not recover to the healthy side. Concerning the condition of the ligaments, the dorsal trapezio-trapezoid ligament was injured. The palmar trapezio-trapezoid ligament, not visible on arthroscopy, was supposed to be undamaged because the palmar fragment of the trapezius still remained in place.

The injury was caused by a pulling force, which was suspected to be a complex force including abduction and distraction, and showed an unusual pattern compared to previous reports. The presumed mechanism of injury based on the intraoperative arthroscopic findings was damage to the radial side of the carpus, trapezius, and scaphoid, resulting in a rupture between the trapezius and trapezius and a SLIL injury. Had a more severe axial or shear force been applied from the path of injury, rupture of the peritrapezius and periscaphoid could have occurred.

Our patient suffered an axial peritrapezial dislocation of the carpus following a tearing of the thumb. Plain CT images were helpful in diagnosing pathology because plain x-ray showed subtle changes. We performed the surgery under arthroscopic assistance, and we were able to obtain precise reduction and assess the path of the lesion. One year after surgery, carpal alignment was maintained without traumatic osteoarthritis. We believe that arthroscopy-assisted surgery for rare fracture-dislocations is useful for anatomically reducing and evaluating the path of the lesion.